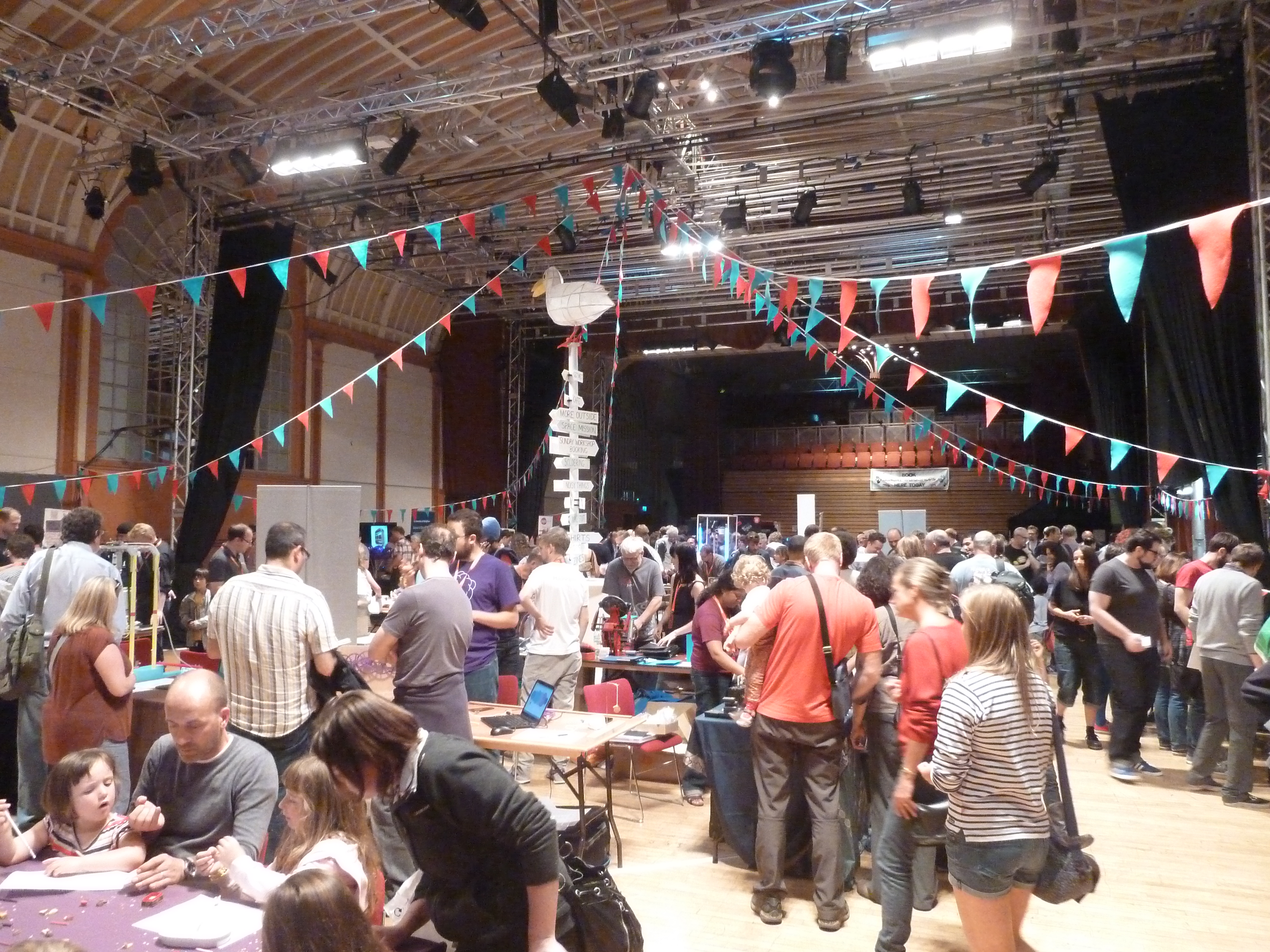 A few weeks ago, Jelly and Marshmallows were at Brighton’s Mini Maker Faire, exhibiting the Kinect controlled crane, Firebox the balancing robot and our new cardboard wind tunnel. Here’s a quick run down of how our stand worked out, followed by our highlights and observations from the day: 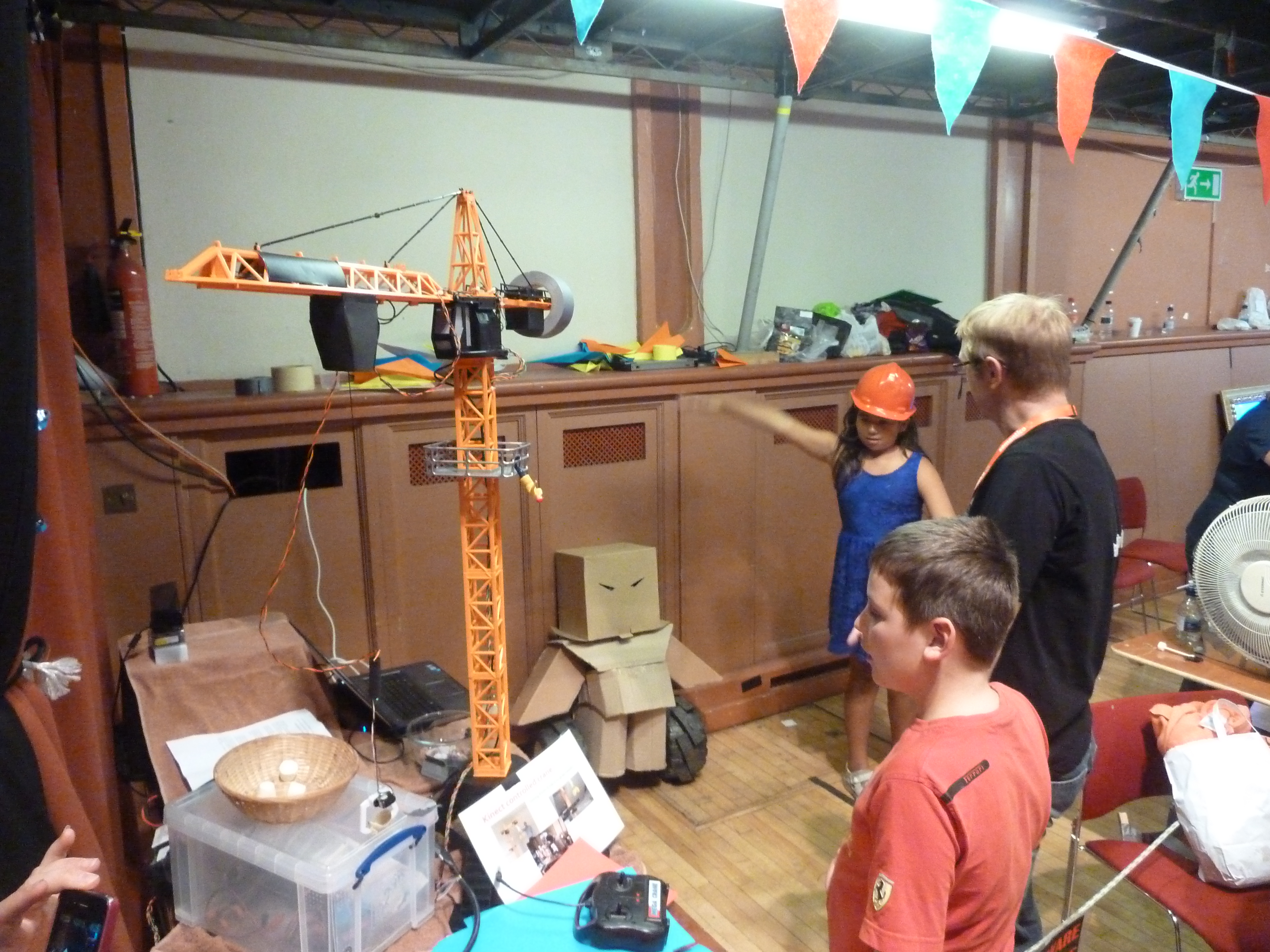 This year the crane was functional all day, thanks mainly to our stand being away from direct sunlight and against a wall. The big toy crane and bowl of sweets attracted plenty of attention and kids were queuing up all day to have a go. Unfortunately a number of factors made it difficult for the kids to control the crane:

A few older children managed to successfully control the crane to pick up the sweets (one even picked up a bowl full!), but for most it was too difficult. To make it more fun and to allow more people to be involved, we changed the game slightly – the movement of the crane was controlled by the crane’s original wired controller, and the grabber was controlled via the Kinect. This worked really well, and the kids really enjoyed using it. I think they would have enjoyed using the stock crane just as much though and they weren’t really learning anything.
One thing the crane did succeed at was making the operators look like idiots, it’s just a shame it was mainly me: 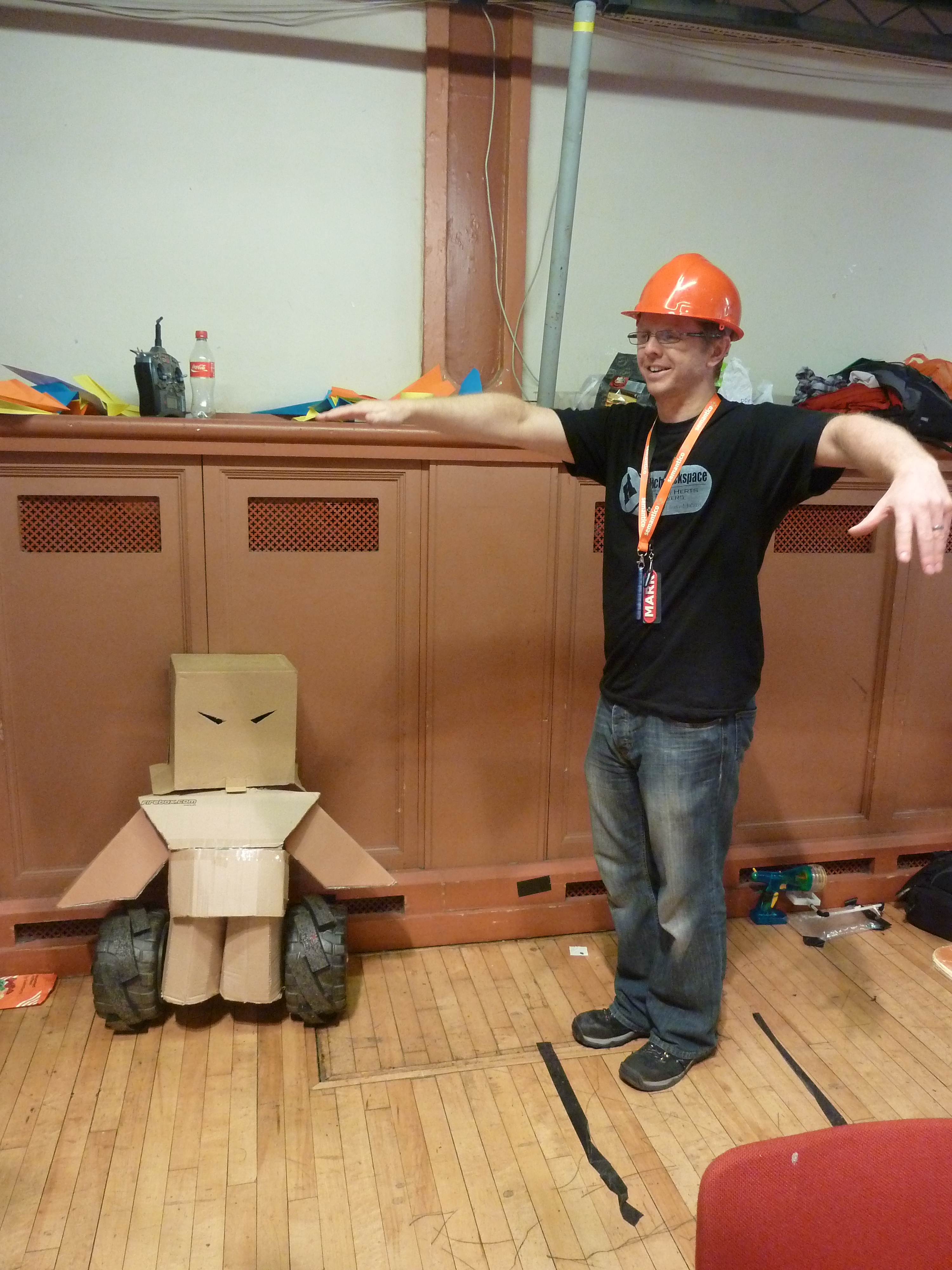 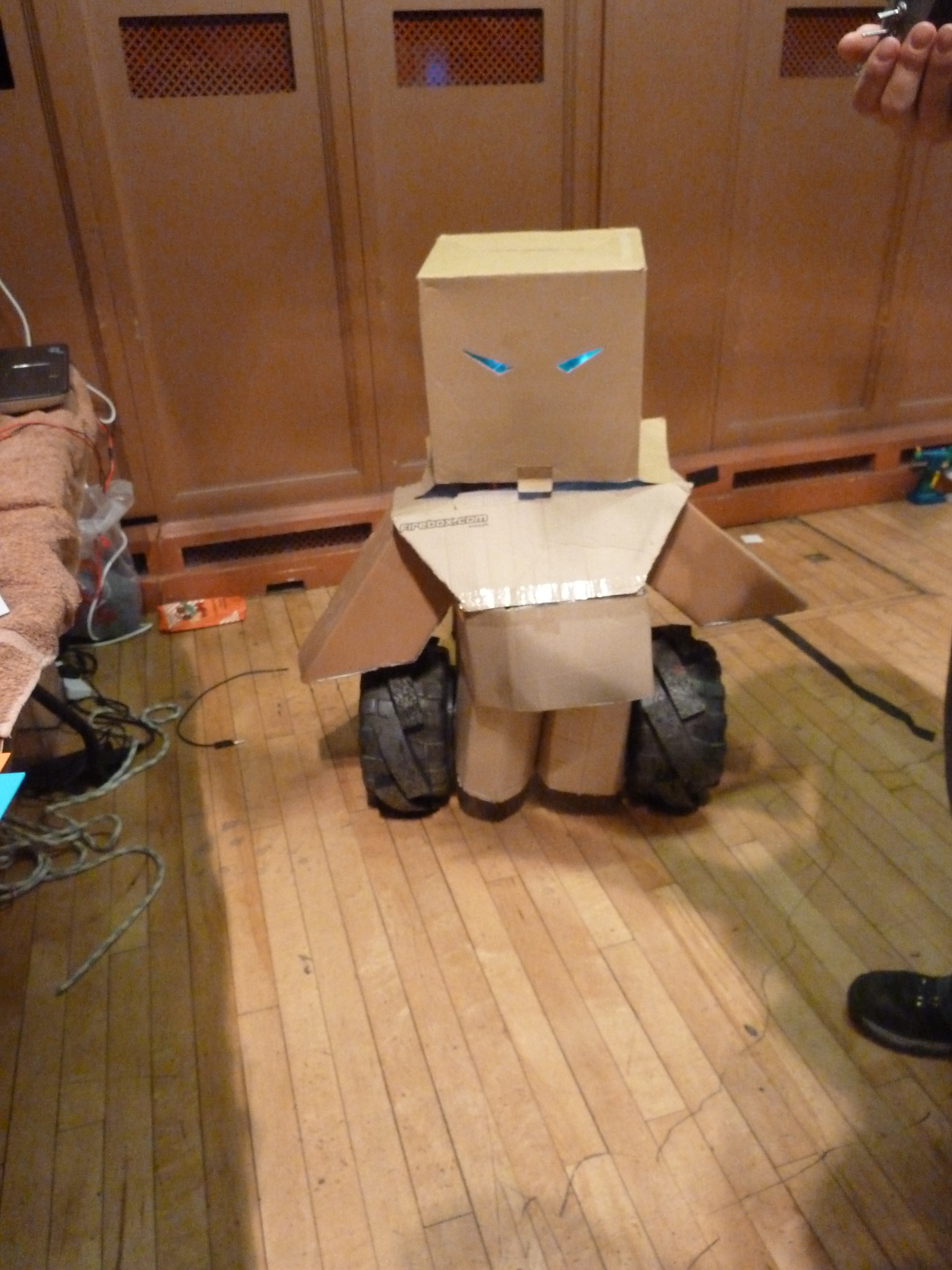 Firebox performed as usual, getting lots of attention. Despite not touching him for nearly a year, with just a battery charge and some minor glue gun repairs to his body work, he ran well all day. Maybe before next year he’ll get a few upgrades 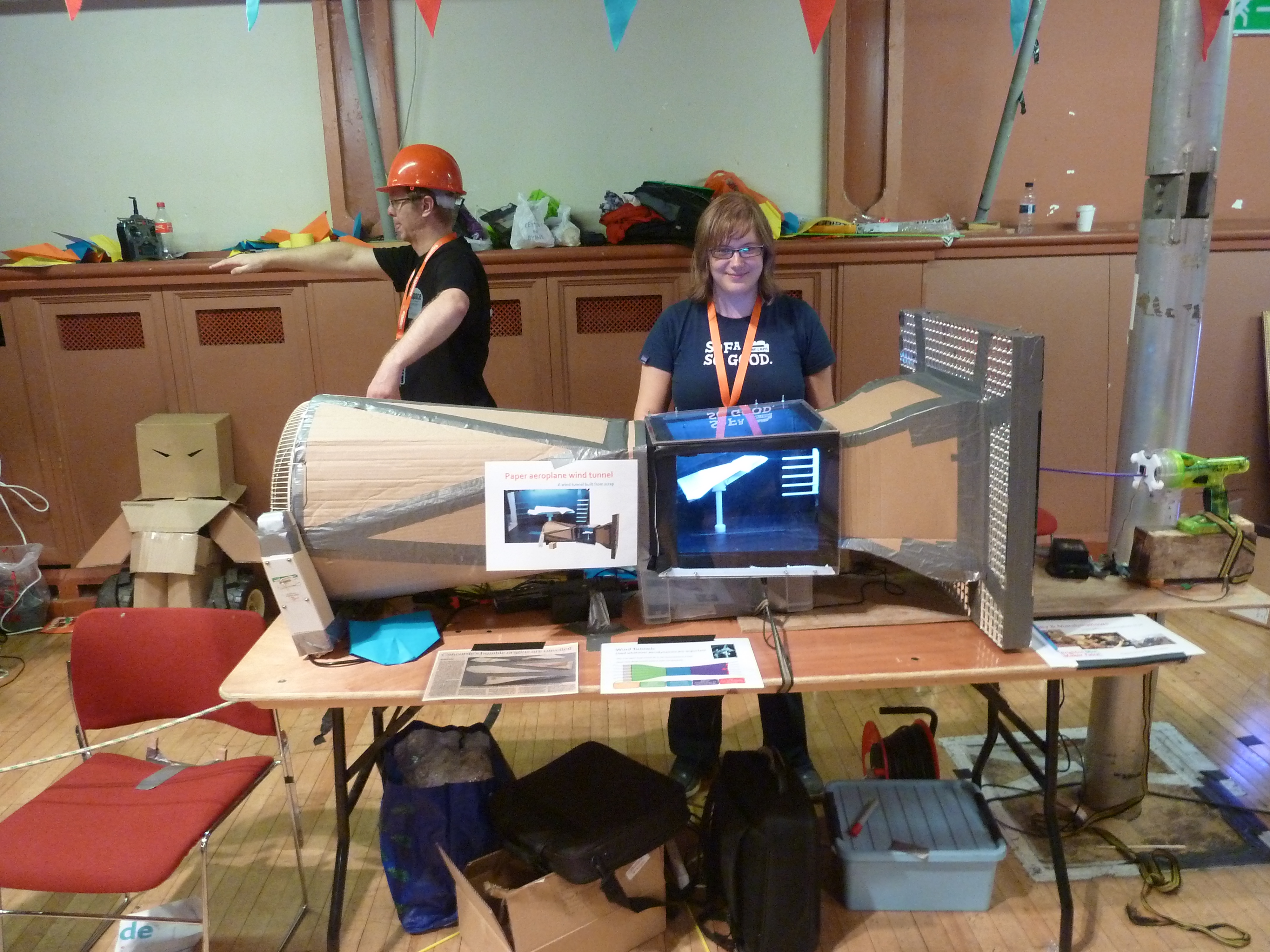 The new wind tunnel performed great, with rarely a break in the crowds of kids and parents vying to get their planes tested. The combination of a simple practical task, a bit of science, some flashy lights, smoke and a big green button seemed to work really well and get people interested. We had a few technical problems with the smoke and the fan control (big green button) but it ran pretty much continuously all day. More interesting for us was the response of the crowds to the ‘task’: most followed the simple supplied instructions to make a ‘standard’ plane and were interested in the science of flight. A few made planes of their own design, but on the whole any adults who were interested hung back and just observed. It surprised us that a few adults couldn’t make a paper plane even with the ‘child friendly’ instructions provided!

Between the crane and the wind tunnel, I think we learnt a lot at this Maker Faire of what people are interested in and capable of.

The rest of the Maker Faire…

…had the usual mix of crafts and technology, displays and hands on workshops. Here’s our highlights of the other stands

Not So Secret Squirrel 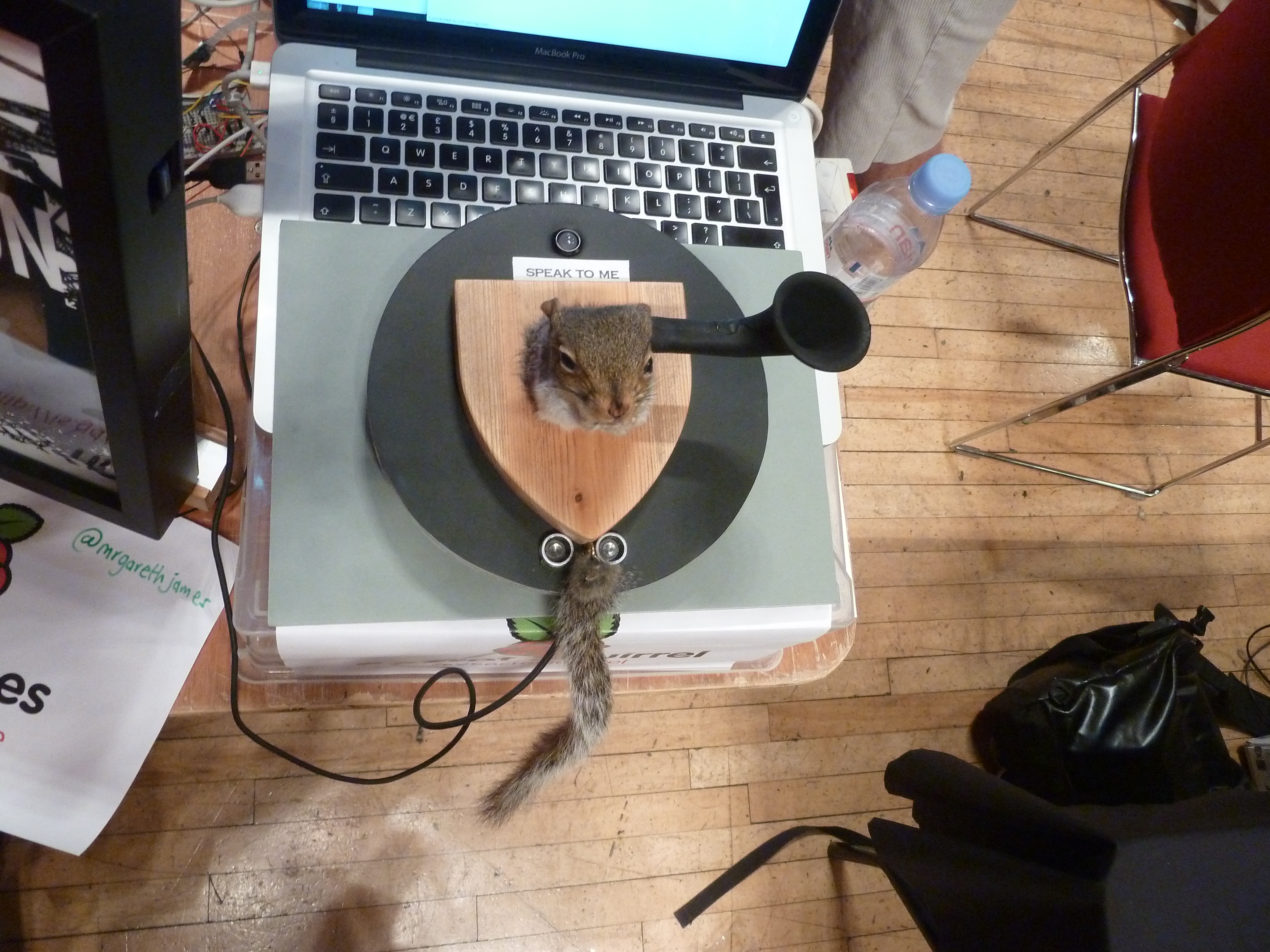 Secret Squirrel was a great, if slightly creepy, concoction of Gareth James , A stuffed squirrel with an ear horn (and microphone), connected to text to speech software, that tweeted the ‘secrets’ that attendees whispered. Secret squirrel’s twitter feed is here:  Not So Secret Squirrel 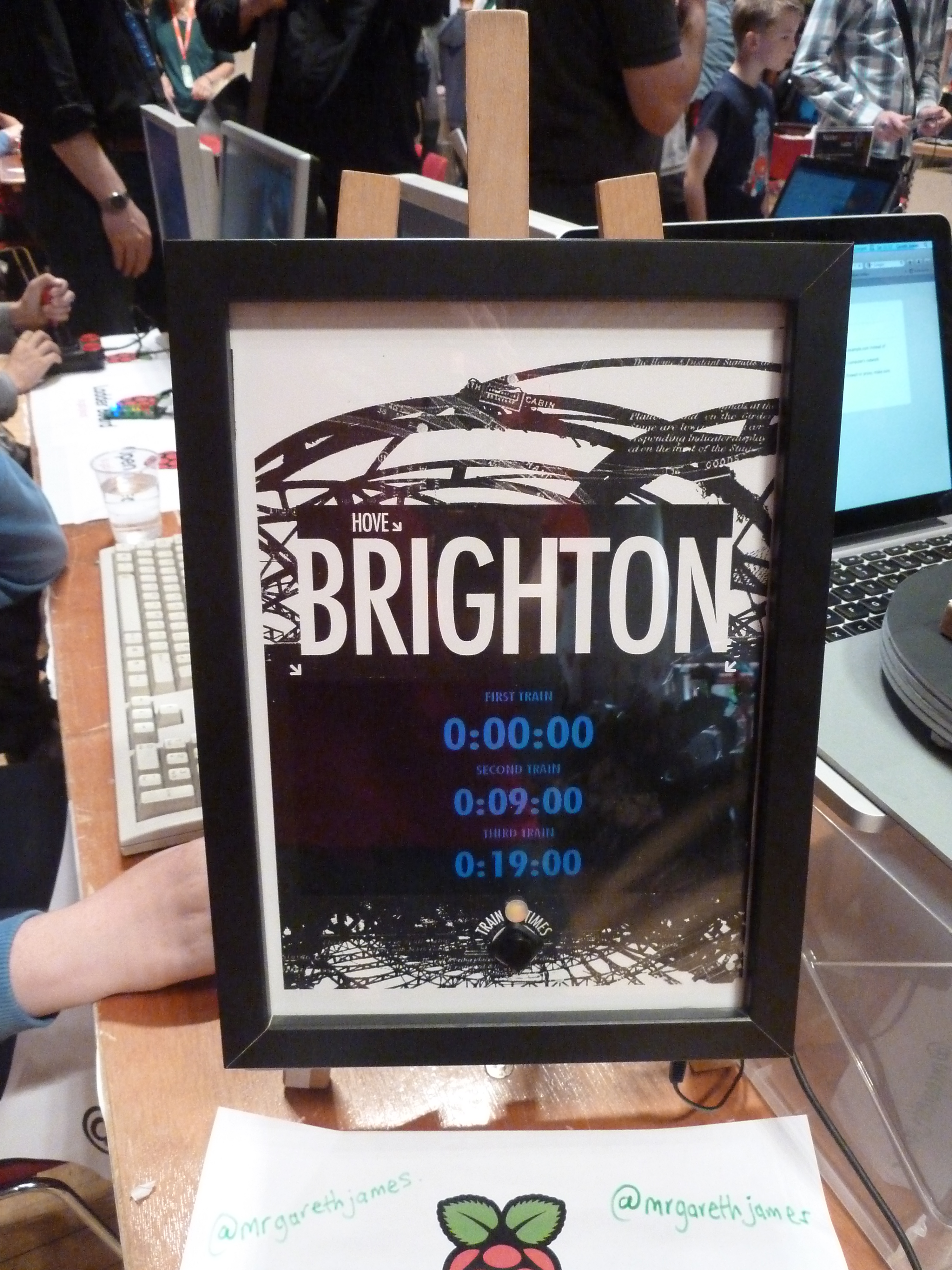 Another stylish project by Gareth was this lovely live display of the next three trains to Brighton from Hove.

Fabrivan were showing off their big laser, cutting stuff live for the public throughout the day. They’re a Fablab/Techshop like outfit with laser cutters, routers etc, based in Brighton. I thought it was brilliant that people could see and access such technology for themselves. 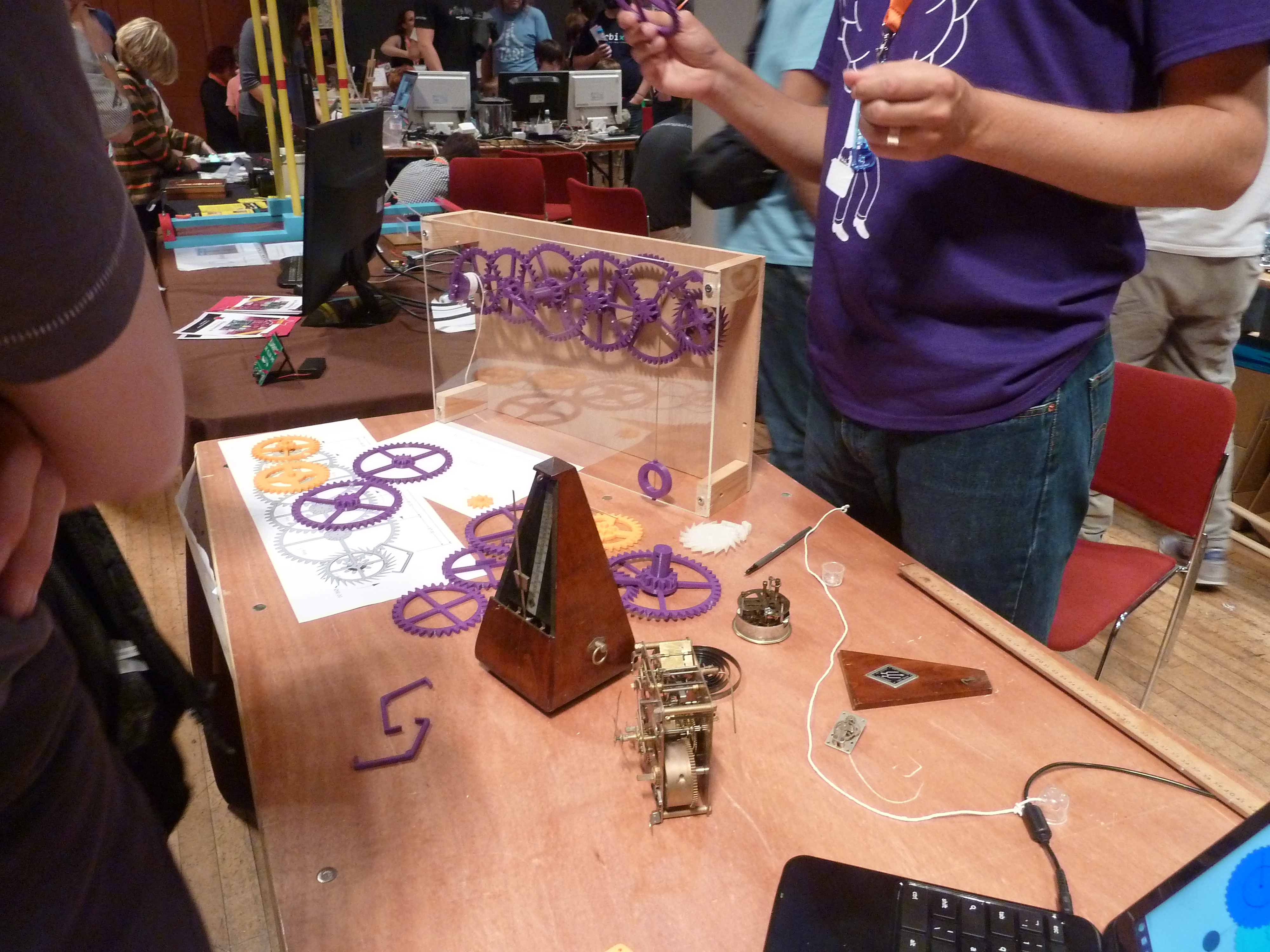 This 3d printed pendulum by Robert Hart was a brilliantly simple demonstration of how early clocks kept going and pendulums can keep time. He has an equally brilliant and simple website describing it here.

The day after the Maker Faire we were lucky enough to get a quick tour around Build Brighton, Brighton’s Hackerspace and get interviewed by Dominic Morrow for his upcoming podcast,  Both will be subjects of future blog posts…