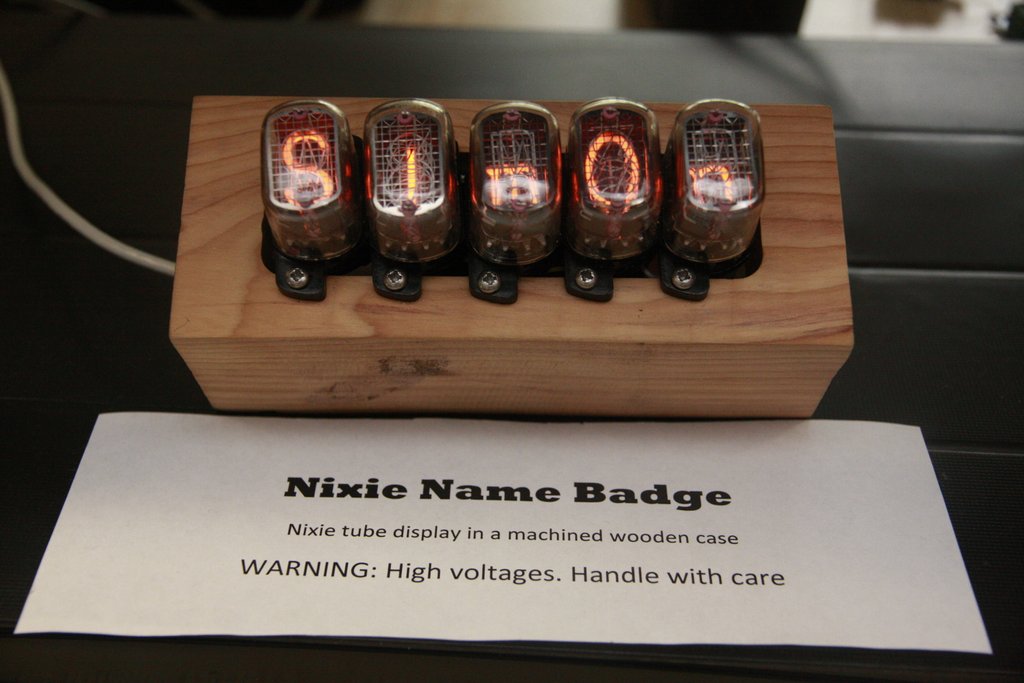 When investigating the world of nixies I realised my name is one of few that can be written. Back when they were around, Nixie tubes were expensive and only really used in scientific equipment. Also the impracticality of having much more than 10 cathodes meant text was never displayed like this (a few 14+ segment tubes did exist) The only individual cathode letters that did exist were for displaying units on equipment like multimeters. The S, m and n are presumably seconds, milli- and nano- respectively, and the awkwardly large I and O are because these were not available as letters, so I used numbers 1 and 0.

Originally envisaged as a wearable name badge, a mixture of the depth of the IN-12 tubes when I received them and the likelyhood of needing to have a 200V supply close to my heart with minimum thickness between me and it made this become more of a table plaque. The display originally switched between two screens to say “HI Im… SImOn…”, but the 555 I employed for the task of switch got inexplicably hot and eventually smokey. Being the night before Derby Mini Maker Faire I opted for safety and did away with the 555, leaving hard wired as SImOn 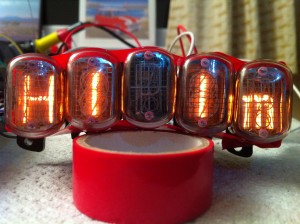 Inside are several surface mount high voltage transistors soldered direct to the pins such that if the tubes were to become a real badge, the size was not increased, while both screens could be displayed with only 2 supply and 2 signal lines into the back. I made the block in the most simple way I could think of, intentionally leaving airspace around the tubes for keeping the cheap and inefficient supply cool (I recommend going for Taylor Electronics supply, MUCH better).

The wooden body is made from a block of english yew I had originally planned to use for the nixie clock (before my colleague offered a lovelly piece of padauk) and was my first bit of milling, using the manual (non-CNC) mill that work had quite recently installed. The workshop got quite full of sawdust leaving quite impressive shadows of the tools I was using at the time. 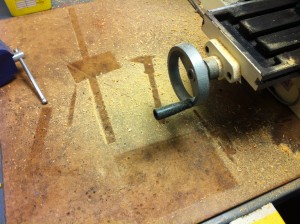