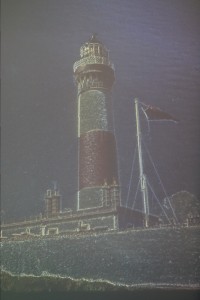 Most image processing is done by computer, and it often requires processing the Fourier transform of the image. It is a little known fact  that it is possible to apply Fourier image analysis without digital processing, using only optical elements such as lenses.

A simple arrangement using two lenses and a collimated lightsource can do this with surprisingly impressive results, even if the alignment is only done by eye. It is called a 4f correlator, which comes from the fact it can be used to correlate images (i.e. identify if an image element is present in another image)

Collimated light is shone through a projector slide, and a lens 1 focal length (1f) away performs a Fourier transform  which appears 1f the other side. The image is then reconstructed using a second lens 1f from the Fourier plane, reforming the image 1f the other side (hence 4f), but as the image has passed through a Fourier plane, it can be filtered such that it has processin applied when it is reformed. I achieved horizontal and vertical edge detection (high pass) and horizontal and vertical blur (low pass), all using pins and cocktail sticks and tin foil. 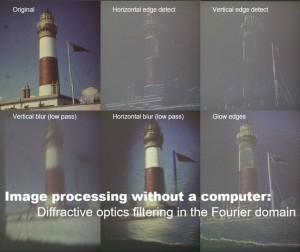 I took this photo of a ball ended pin in the Fourier transform of the image. It is performing a high pass filter (edge enhance) 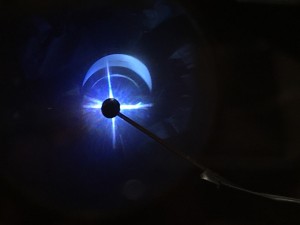 Filtering in the Fourier domain

For more information, I wrote an Instructable that can be found here